Capitalism, how well it worked for me!

I received this e-mail from someone who truly hates Obama and calls Obama a socialist, liar and incompetent fraud. They’re comfortable with assets (home, cars, etc.), now in retirement from corporate america and also a veteran with benefits. 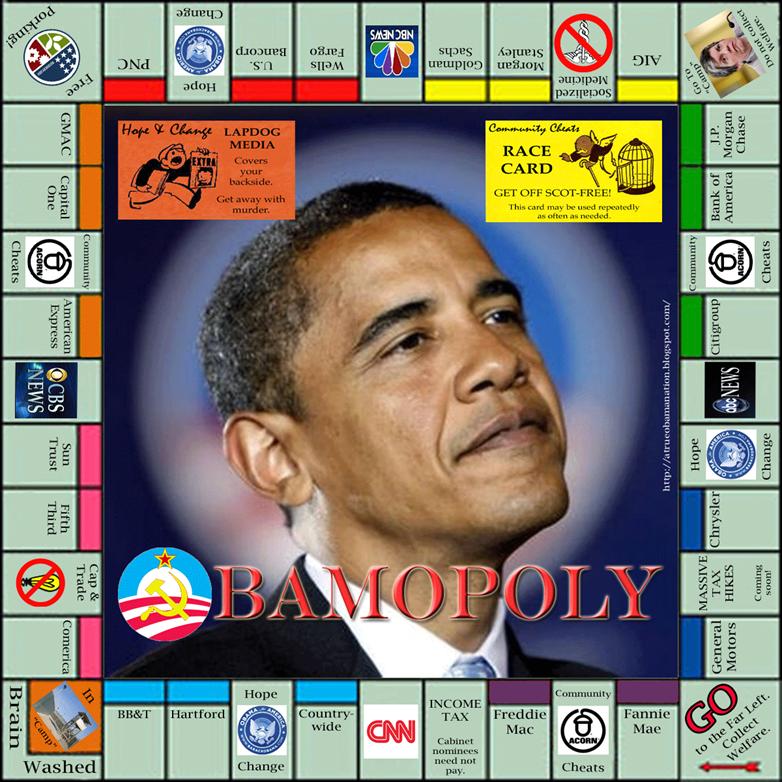 The object of the game is to destroy American capitalism by having the government take over everything!

Tokens include a bus, a teleprompter, a sprig of arugula and a waffle iron.

Too bad, you’re already playing… And quite frankly, in this game, nobody wins!

I should send this to the Rockefellers who sure played a major part in tanking capitalism big time. Venture caps raised hundreds of millions annually including during war and height of nationwide high gas prices. Purpose of raising money (which came from all major banks): to invest in this country, create jobs, produce exports, stimulate revenue, etc. Yet, nothing to show from it.

Where is the money? Bernie Madoff is one of many frauds that has been and will continue to be exposed within the next year. Their game version of capitalism. And many of the venture caps are linked to lobbyists [and Capitol Hill], bankers (including top banks bailed out) [see list in above game caricature].

Everyone blamed Bush, i.e., the war tanked economy, deficit. But the war exposed that Senate and Congress just sat around collecting sponsors and looked the other way. Revenue wasn’t coming in while store shelves were filled with Made in China (Walmart) and Israel imports (where investors are now pouring their money into).

And now with blaming Obama, the same people who got a pass for 8-years will enjoy another 4-years of the same – do nothing, get kick backs and sit on their butts to wait for the next big commerce like slavery (cotton, sugar), steel, auto industry & computers. The new smokescreen pass: healthcare. Meanwhile, years ago, Microsoft and banks, with approval from congress/senate outsourced* thousands of jobs overseas, and continue to do so. I find it hard to believe that a call center couldn’t be set up in poorest economic states here!

Capitalism: it sure has worked well, huh? I lost my assets from capitalism in 2000 courtesy of Venrock.com, a Rockefeller investment company, which is even more wealthy now after past 8-years. Go figure.

If I were a private insurer, I’d raise rates immediately, profit all I could before bankruptcy sets in. My insurance company went bankrupt, but was bailed out. So I’m paying twice, while my insurance company execs got bonuses for failing. Capitalism. It sure worked out well for me!

Now to research socialist [healthcare] countries, like I guess UK and Canada and see how they’re doing economically w/capitalism. Hmmm 😉

There were ZERO laws to protect me, after ALL the taxes I paid. And because of my income, my taxes were 40-50% of income being single with 0 dependents, and not a chance of owning a decent property in a non-crack area in California. Outraged in 2000, I began calling for action. EVERY SINGLE THING I WORKED FOR since age 15, I lost! What I discovered: Rockefellers, who could have easily stopped the bleeding with change from their couches or car seats, were connected to the Clintons, especially Winthrop Rockefeller. Sen. Jay Rockefeller’s office: no comment. Basically, beat it, I don’t really give a fuck about what you worked for. Just pay your taxes so I can keep my perky job! And the silence from others was deafening while I was literally waiting to die!!!!

Meanwhile, the frauds, including Venrock.com, David Hook (hookpartners.com) and MasseyBurch.com, are still collecting money and are beyond comfortable, and that includes the ponzi schemer who was paid money by the Rockefellers to go away!

It should also be noted that Venrock and many venture caps increased their staff since 2001. This industry hasn’t suffered one bit. Follow the money trail to find out why!

And now, many 1st and 2nd generation european immigrants and their counterparts, die hard confederates who trashed republican party (with direction from Rush Limbaugh, Ann Coulter, Sean Hannity, Elisabeth Hasselbeck, Glenn Beck and David Duke), are complaining 24/7 about politics AFTER damage has already been DONE over and over right in front of their faces since 1999. But moreso complaining because things got so bad from catastrophic capitalistic failures, their worse fear came to life: a black man is now President of the United States!

Their complaints about “their” taxes are falling on deaf ears this way. During the period of their massive influx to U.S., minorities paid taxes, including unfairly locally, but had ZERO government rights: no right to vote, eat or exist in public places, buy property in non-minority areas, nor even had the right to live as we saw in the cases of Dr. Martin L. King and Medgar Evers (a World War II vet also discriminated against within the military).

These complainers are the same people who believe our country will rebound on its own, i.e., wait for some next commerce breakthrough which will require extensive exploitation of cheap labor to profit from.

Then again, after 10+ more years in Iraq and Afghanistan, everyone will either be dead or too tired to care.

After the nonsense I’ve been through while watching this country become dismantled since 1999 by both greed and descendants of the lunatics who took over St. Tammany Hall, I AM about ready to wear a BHO armband with an American flag and number 44 on it just to piss off the clueless casually displaying swastikas over nonsense. Because I believed in working to get what you want because no one will take care of you, no one will rescue you (NO ONE didn’t). Only to discover that an elite group of people took care of each other and GOT PAID with tax breaks along with bonuses, golden parachutes and bailouts for failing at their jobs! While those with comforts spend their days spreading rage and hate in a dying effort to control lives of others (gay marriage, abortion, separate and unequal, etc.). Or worse, use their energy to capitalize by selling fear of an unknown future after selectively ignoring the past: Michelle Malkin.

* India has benefitted so well from outsourcing, their country now has nuclear defense. Capitalism. It sure is successful, huh?

“I installed a skylight in my apartment...The people who live above me are furious.”
— Steven Wright