This chillin’ day is courtesy of white collar frauds

Courtesy of white collar frauds: today = workout, then hair done, then dinner with most amazing persons in world, people with ethics 🙂

An white-collar fraud built day, thanks to top state law enforcement in NY, NJ, Florida, and Minnesota aiding and abetting Governor Chris Christie’s New Jersey based white collar fraud group that is scamming veterans, elderly, disabled across United States. When you see the crime I’ve seen at the top of food chain, boy, do you see a lot, and who’s really looking out for U.S.! Um, good luck with that ISIS red-herring! 🙂

So far, I’ve seen direct Rockefeller fraud. Yall ‘memba Federal Reserve? Now, I have seen crimes of those “protecting” it and corporate interests. And I can truly say, yall are being played. But keep believing your elected officials and public servants are looking out for you, and good luck with that. 🙂

So slave away for your paychecks while scraping to get by while your company gets all the perks of your slave labor and cheats you coming and going. 😐 And definitely keep buying “Not Made In US”, you’re feeding top of food chain (e.g., Walmart) while stabbing your own self in the back. 🙂 I’ll be chillin’ courtesy of white collar frauds who worked OVERTIME to undo all I worked for! So you ain’t got to tell me twice OR think I’ll enter THAT literal RAT RACE again!!

This “rant” brought to you by person who warned in 2001 of the exact economic disaster that unraveled in 2004 then blew up in 2008, while top 1% got paid and laid. Their lives haven’t changed one bit while rest of country has to sacrifice, make adjustments or give up what they’ve worked for. Your gub’mint ain’t regulating Wall Street, water, food, not even PET FOOD, but regulates prisons and drug trafficking while opium and oil raiding!

But don’t mind me, I’m just crazy… 🙂 cuckoo-cuckoo 😀 *like a fox but without carnivorous stuff, okay crazy like ganja man, him know* 😉 Ganja man, see him know! 😉 Bob Marley – Get Up Stand Up

Betcha this will be our new world anthem after top 1% is done with us? LOL Bob Marley – Redemption Song https://www.youtube.com/watch?v=QrY9eHkXTa4 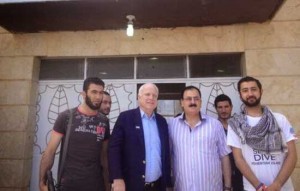 And the stupid NRA gun-nut fucks are stocking up but fighting the wrong persons — blacks/non-whites they think are coming to invade their ignorance-with-pride neighborhood. They’re like the poor Nazis who looked to Hitler to provide their dream life while Hitler lived in a castle and they lived in tenement housing. 😀 And government is NOT coming for their guns, government is leaving them behind while the gun nuts are distracted by newest red-herring: ISIS. Gun nuts don’t even know who/what ISIS is, but John McCain and Lindsay Graham do!

If ISIS or any heavily armed terrorist group wanted to destroy U.S., all they’d have to do is dangle $$$ in front of our elected officials, then take them out one by one or in bulk. The last time the whole world stood behind a terrorist attack (September 11, 2001), the whole world took their eyes off the top 1% which got richer, richer and richer. Green was the only color they concerned themselves with and it didn’t matter which color person they worked with to get it or which color destroyed while getting it! So start the clock… the whole world is watching ISIS. Seven years after September 11, 2011, multiple countries were BROKE while their top 1% were richer, richer, and RICHER!! So by 2022, yall-be-fucked… big time… courtesy of your top 1% who are your gods. Top 1% is so god, they DON’T even attend church, don’t have to because they truly believe they’re gods while others strive to be JUST. LIKE. THEM.

But too late, you can’t feed 1% (with your $$$) and get rid of it now. Your whole way of life has to change: where you buy your food, necessary clothes, basic needs, etc. And YOU, you’re running from cops in an expensive pair of NIKEs & designer jeans? Will NIKE & designer bail you out, front your legal fees?? If your priorities ain’t straight now, hey, don’t know what to tell ya. It’s “brother against brother” days with christians HATING poor, and media having lemmings believe the poor is the enemy. 8-/ By the time you figure it all out, you’re 6-feet under, with only seconds before your death to realize how much time you’ve wasted with regrets, while top 1% lives out long and healthy lives with wealth to pass down for generations. 😀

When the power of love overcomes the love of power, the world will know peace. -Jimi Hendrix

“"We hang the petty thieves and appoint the great ones to public office."”
— Aesop