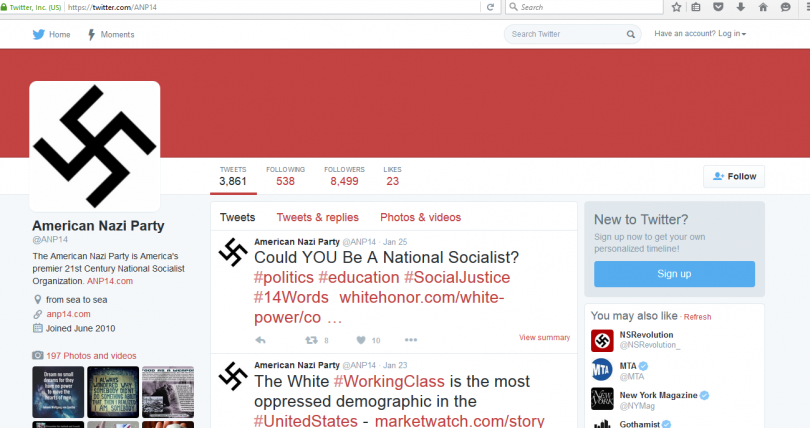 Twitter could have been a tool to bridge the “information gap”, as well as connect people around the world for significant change and impact on major issues such as poverty, racism and cultural awareness for growth and opportunities. But now Twitter’s a playground for all things Kardashian for the dumbed-down side, and all things neo-Nazi, KKK, neo-confederates and their offspring: today’s Strom Thurmond GOP. Politicians are even using Twitter to literally publish lies, and even one politician is using Twitter to promote sedition, treason and acts of violence against government.

Here’s the death of twitter: https://twitter.com/ANP14 — PURE GARBAGE on display.
Tweets by @ANP14

I’ve discovered via several Twitter users that their accounts have been suspended or locked for responding back to racist garbage which actually sought them out to make offensive and/or vile statements. Meanwhile, even with new Twitter rules, racists literally create accounts to roam Twitter and “gang attack” persons based upon race, religion/non-religion, sexual orientation and whatever else these grotesque, non-evolving persons deem undesirable. Or maybe Twitter is auditioning to be “The Donald Trump Social Network”??

Either way, it’s a waste of time. With so many major political and societal issues that should be now widely known and tackled with such a tool as Twitter, top issues of the day involve either a Kardashian or parts of their genitalia or “Stupid Things Racists Say”. Mind you, there are many intelligent persons distributing helpful and useful information, but since Twitter has divided its platform into “celebrities and verified accounts” vs. “little people”, information is now filtered, therefore, not everyone sees the same information unless each person visits a person’s bio directly. And if you’re someone who follows thousands of people, that’s not possible.

Anywhooo, good run for Twitter, but time for something new, something with categories to follow with live, real-time information. For now, Twitter is dead, dying, has been.

And apparently, I’m not the only one who agrees:

5 signs Twitter is dying in a big way
http://www.londonlovesbusiness.com/business-news/tech/5-signs-twitter-is-dying-in-a-big-way/11752.article

My money is on this “optimist” person helping his twitter friends out because Twitter’s now a playground for idiots and racists:
Twitter Is Not Dying
It’s on the cusp of getting much bigger. Here’s why.
http://www.slate.com/articles/technology/technology/2014/05/twitter_is_not_dying_it_s_on_the_cusp_of_getting_much_bigger.html