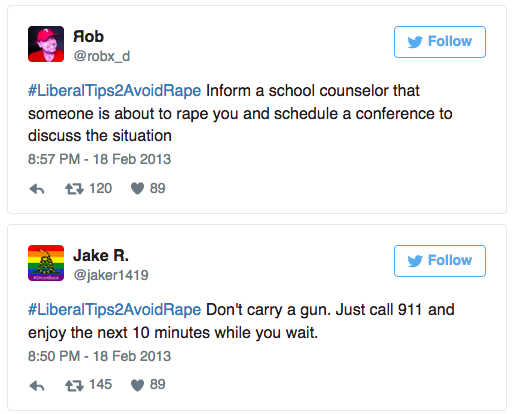 #LiberalTips2AvoidRape Tell him you don’t believe in guns and don’t have one, but you called the cops and they’ll arrive in 12 minutes.

#LiberalTips2AvoidRape If unmarried, consider your rapist to simply be undocumented husband!

#LiberalTips2AvoidRape Don’t carry a gun. Just call 911 and enjoy the next 10 minutes while you wait.

Liberals are seriously more offended by the hashtag #LiberalTips2AvoidRape than by politicians making it easier for women to be raped.

Waaaayyyyy too many to capture, but the ones above pretty much sum up today’s GOP.

Not only do they joke about it, but they also PROUDLY defend their comments with such priceless gems such as this:

Libtards are so stupid they can’t even see this is about gun control &whistels not rape! @ilovemytroops @gopleader @mittromney

And once again, the stupidity of her comment and why people are not running to embrace the Dixiecrats: they’re not trying to get to know you, but simply lump EVERYONE who doesn’t play their hateful nonsense into one disposable group.

“It is curious that physical courage should be so common in the world, and moral courage so rare.”
— Mark Twain