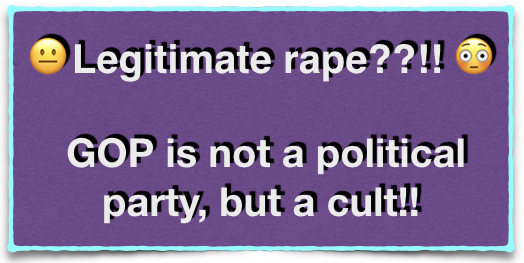 So… ummm Jim Crow Benefactor conservatives don’t tolerate ANY dissent while running around claiming to be “constitutionalists”*.

Sooooo along comes back-of-the-Todd Akin-bus female defender, https://twitter.com/civilebarbie to defend Todd Akin and then throw in an “idiot” comment.

What the hell did that even mean? But it’s hard to understand Dixiecrat language anyway. but note her standard Dixiecrat-“civil” tone when speaking to someone for the first time. She spends her days attacking liberals and even assumed liberals (she AUTOMATICALLY puts person in the same category if they don’t speak her Dixiecrat language filled with hatred and misguided information).

But there was no respectful way to make her point, or even present an actual fact. Just outright insults and biased emotion, which result in only this expression 😐 on my face, followed by, “here’s another clone!”

THEN once she realized she made a mistake, instead of being a HUMAN and apologizing, she simply deletes her tweet and moves on with the “liberal” attacks.

But “it” forgets we can capture her tweets before she deletes it, so that she can continue to play the “Tod Akin victim” while attacking others.

* U.S. Constitution is a document that conservatives and Dixiecrats claim to love, but NEVER read or understand the words of, THUS their 24/7 rabid dog KKK-style hatred of liberals, gays, blacks who don’t bow to their words (“don’t know their place” which is behind them nodding :o), and POOR. Yup, the poor, you know, the persons “Christ” primarily associated with.

And, of course, they’re waving the “patriotic flags” while trashing poor, which is the majority population of our military, food stamps and all. Conservatives also don’t want to acknowledge that highest welfare use in U.S. is in Owsley County, Kentucky, which is 99% white and 95% GOP and the SOLE legacy of Mitch McConnell, one of the wealthiest men in the country and their “hero”.

“Behind every great fortune, there is a crime.”
— Honore de Balzac