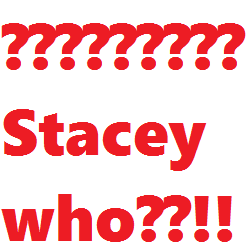 In response to the backlash over her own horrific #OscarsSoWhite statements,

We have to make up our minds,” Dash said. “Either we want segregation or integration. And if we don’t want segregation, then we need to get rid of channels like BET and the BET Awards and the Image Awards where you’re only awarded if you’re black. If it were the other way around, we would be up in arms. It’s a double standard.

FYI, Stacey “Clueless” Dash: many persons of COLOR, omitted from “mainstream” awards shows, are recognized, nominated AND winners at BET, NAACP, Latin and other people of color award ceremonies!

“Clueless” Stacey Dash doubles-down with statements from her masters at Fox News:

“I’m on Fox, because I refuse to back down,” Dash wrote in a blog posted Saturday. “I owe it to my son and daughter to at least try to work toward a world where black people can speak out on any matter they want without the fear of incredible backlash… It’s 2016. Let’s stop taking our marching orders from Democratic slave drivers. They have taken our votes and repaid us by ruining our colleges and large cities. They are responsible for #OscarsSoWhite‬.”
Got all that?

I thought Stacey Dash had some sort of thought of her own, or was given a platform to speak her own mind, but instead Stacey Dash is repeating the #ccot, #tcot, #PJNET, #Breitbart, #tgdn (and make sure you check out this one: https://twitter.com/BraveLad), #twitchy mantra, “Democrats are KKK“, “Democrats are slavers“, etc. while CONSISTENTLY leaving out the fact (TRUTH) that she sits AMONG those former KKK-Dems who jumped ship to GOP to protest AGAINST Civil and Voting Rights.

Today’s GOP is NOT the party of Lincoln.

just shocked to see party now full of Dixiecrats, white separatists/segregationists (who jumped from KKK-Dem to GOP to protest passing of Voting & Civil Rights Acts), treasonists (Cliven Bundy family) and worse. again, in my best Ordell Robbie-Samuel Jackson voice: WTF happened to you, man? your ass used to be beautiful!

Today’s GOP is shaped by none other than Strom Thurmond, a PROUD Sons of confederates Vets AND KKK member as well as co-author of the Southern Manifesto with Carl Vinson. Thurmond is also a rapist of his black teen maid, whom he also impregnated and forced to keep his bastard black child a secret from the public while he and other neo-confederates shaped today’s GOP. Strom Thurmond’s own family, especially Paul Thurmond, won’t even acknowledge his black child, nor will Daughters of the Confederacy, which his legally entitled black child tried to join, but was denied membership for.

The following are just some the many KKK-Dems who have jumped ship to GOP, resulting in what we see now: divisive, racist, regressive bills and policies with no innovative future in sight because of their science denying beliefs, i.e., “just leave it to God” or “pray it away/for it” while literally standing by with wealth and watching children die of poverty related illnesses or in intentionally created war zones for greed and profit, and stripping their education AND basic needs such as clean water and equal protection under all laws.

There are far too many pro-KKK, active KKK, neo-confederates and the like in today’s GOP to mention. But Fox News’ rhetoric clowns always bring up Robert Byrd to classify Democratic Party as the “party of KKK”. Byrd was a very vocal Ku Klux Klansman who remained a lifelong Democrat, too lazy to make the switch with the other klan. However, just one problem, Byrd repented and apologized, while the ones who jumped ship to GOP still remain UNAPOLOGETIC and ignorant with pride.

Meanwhile, here comes Stacey Dash to placate persons like the above, persons who wouldn’t accept her as equal unless she’s bowing and serving them, and nodding to their ignorant, Jim Crow throwback statements and bills authored.

But wait… cozying up to “shit on sidewalk” is the new “acceptance” platform??

And does cozying up to shit on sidewalk make you feel and smell better, or make others want to run to be in your presence??

And Stacey Dash claims she’s speaking for her kids future. Her kids will be embarrassed by their mother being on the WRONG side of history. Her words and actions will affect her kids as adults they make their own choices and discover the ACTUAL world Stacey Dash ignores. But the good news is, Stacey Dash will have earned enough $$ for their years of “Mommie Dearest” counseling.

A friend summed up #WhoIsStaceyDash perfectly, and they’re a former employee of her same network which now pays her to placate hatriots.

Stacey Dash was an actress who wasn’t getting roles. She did photo layouts, nudes, practically everything to stay noticed. Then she said something stupid, found an opportunity and now is the “She said it too, so it’s not racist because she a n… because she’s black! So it’s ok!” excuse that racists love so much.

What people do for money…

Or she actually believes everything she says. Which seem to get worse and worse, almost like a script.

In any event, she’s still playing the part of the black friend to people that are Clueless.

Thus, Stacey Dash has found her niche: a PAYING gig, for which she is willing to say or do anything except speak with any amount of knowledge of history or whom she sits among daily.

But thank goodness for Gabrielle Union, a role model for strong, intelligent black women and women of color everywhere!!

“Never argue with a fool. Listeners can't tell which is which.”
— Unknown