Grover Norquist of “Americans For Tax Reform”, which should be honestly called “Treasonists Who Refuse To Pay For Infrastructure”

Yesterday, 23 July 2011 was Norquist Flash Mob Day – http://www.facebook.com/event.php?eid=134874383263514, but I don’t think that would have mattered if taxpayers visited Grover Norquist’s public page and expressed concern over his King-like hold over elected officials on any other day.

But one thing I did notice that was extremely disturbing: Norquist and/or admin removed the posts of anyone not in favor of Norquist, yet Norquist declares himself a public figure and represents an organization with the word “American” in its title, AND organization was created on behalf of “taxpayers” with taxpayer funding. To be more honest, Norquist’s page should have a Jim Crow-type “Conservatives Only” sign and his organization should be called “Treasonists Who Don’t Want To Pay Their Fair Share of Taxes But Insist Upon Utilizing Government For Personal Profit“.

After noticing one person after another banned, I decided to use an account to post a message in praise of Norquist. Here is that message, which should have raised the eyebrow of admin banning and blocking persons completely from his public page:

see post of “Michelle Martin” (at bottom on 1st image) 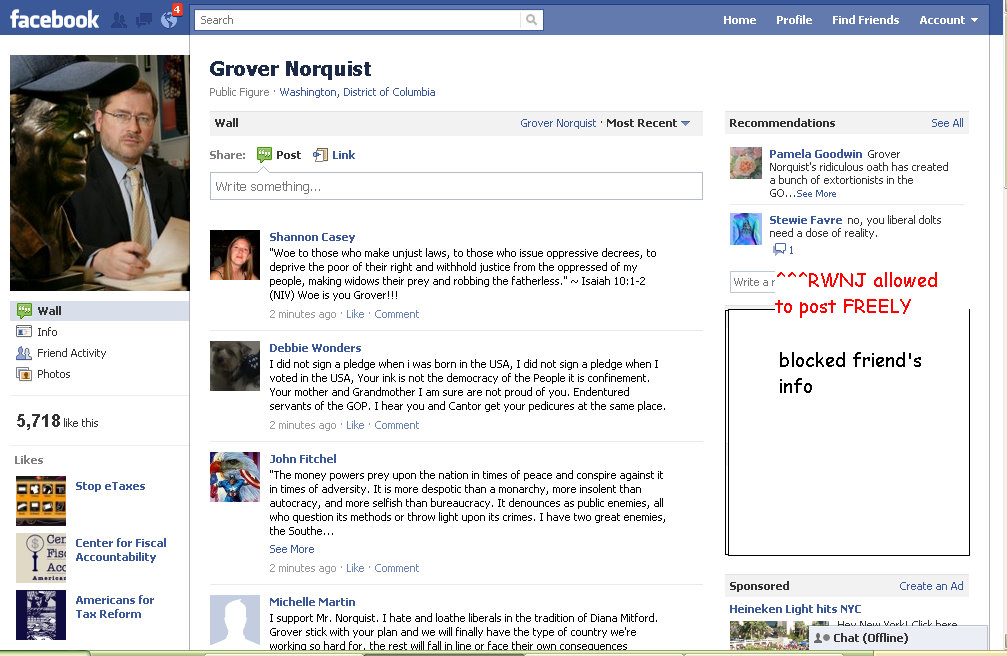 Post details with link which when clicked will display content removed message (however, original message is still available through Facebook’s database records thus why I made sure to copy the link with message ID): 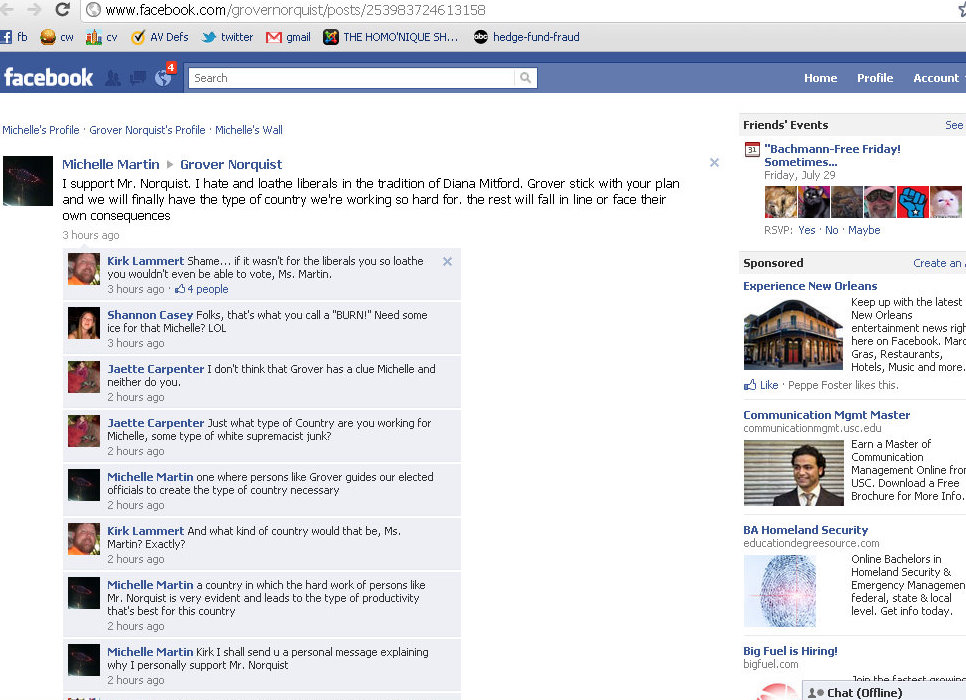 what should have raised admin’s eyebrow: referencing a notorious Adolph Hitler insider, Diana Mitford, while expressing hate and loathing for liberals (in the same way that Mitford hated Jews). even if admin didn’t know who Diana Mitford was, the fact that I would be allowed to post a comment expressing hate and loathing for liberals (persons different from them) was disturbing.

It was hard interacting with persons who didn’t support Norquist who were clearly offended by the post because I wanted them to know the post was intended to show the true nature of admin banning persons from public page. But I was so glad persons who replied asked the questions they did. And I noticed there was no negative comment from “Stewie Favre”, the resident Goebbels-troll attacking anyone not in favor of Norquist and allowed to remain on page while persons being attacked were simply expressing their entitled free speech as the taxpayers who made Norquist’s wealth possible! The persons attacked by “Stewie Favre” were banned.

I waited to see how long my original post above would remain. It was allowed to remain while persons who posted immediately before and after it were banned and throughout the night.

I decided to wait until the following day to expose the “censoring failure”. Persons were still being banned from the public page. I posted the following messages today: 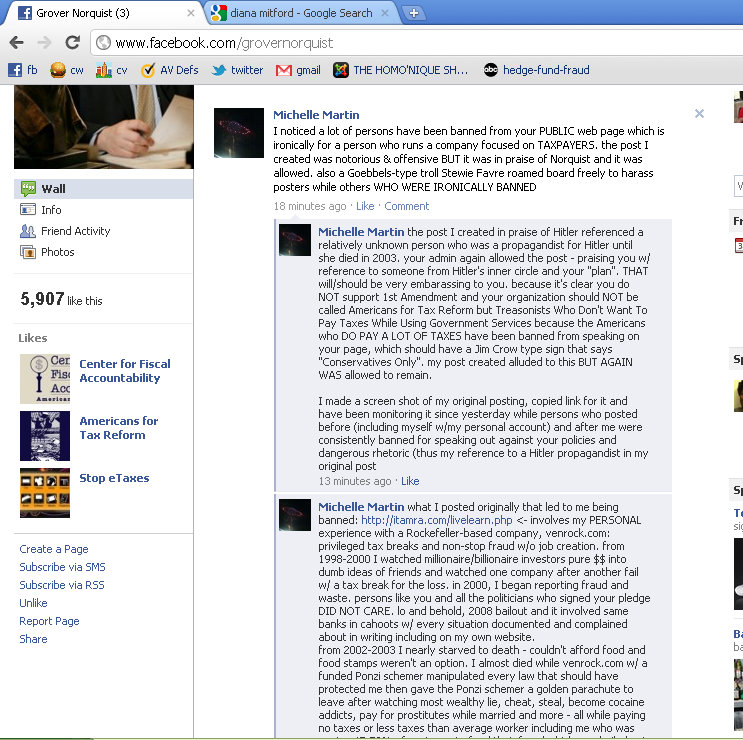 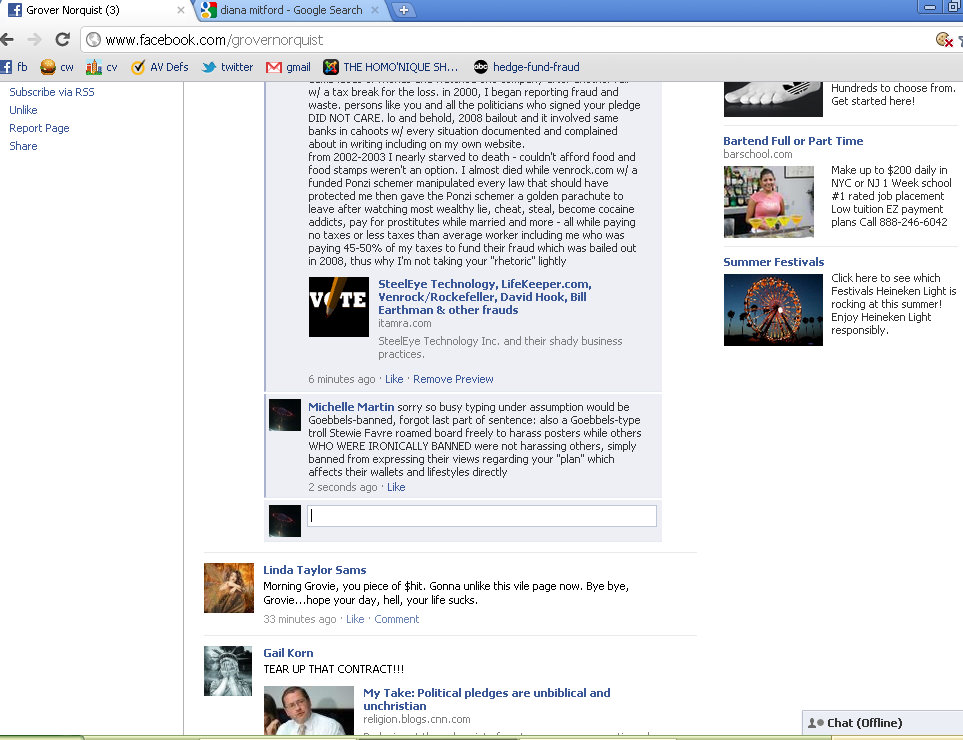 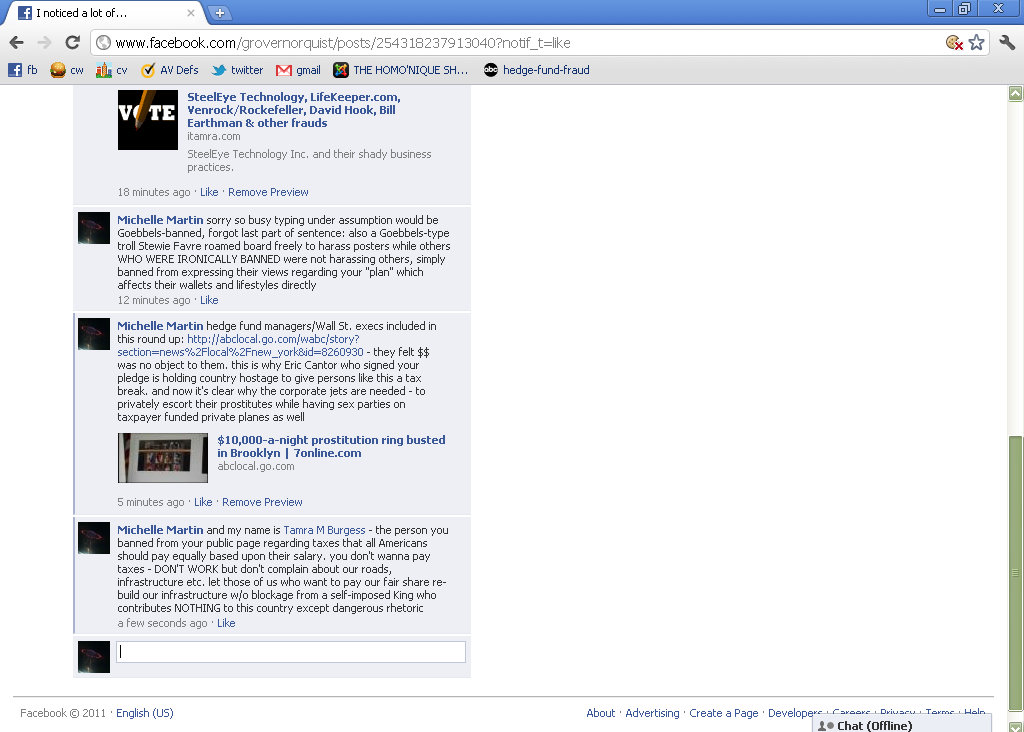 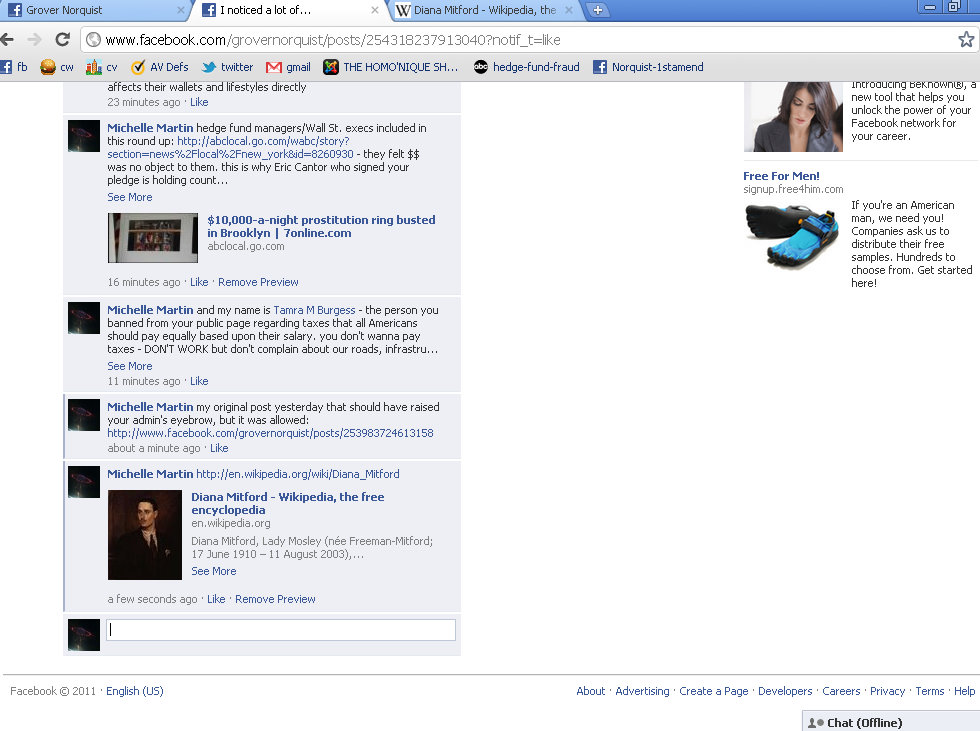 Sometime shortly after, I was banned from site and posts removed, including original post www.facebook.com/grovernorquist/ … 3724613158 – site scrubbed clean of their original support and tolerance for a message which referenced a Hitler insider. Had I said nothing, the post would have remained permanently.

Our elected officials signed a pledge to Grover Norquist, persons we elect to office to represent our best interest not work against us. I find it disturbing that our leaders signed a pledge to Norquist as if he’s some kind of King, and now find it even more disturbing after seeing the tolerance for messages in praise of a Hitler insider, while banning all those, again, responsible for Norquist’s wealth through government.