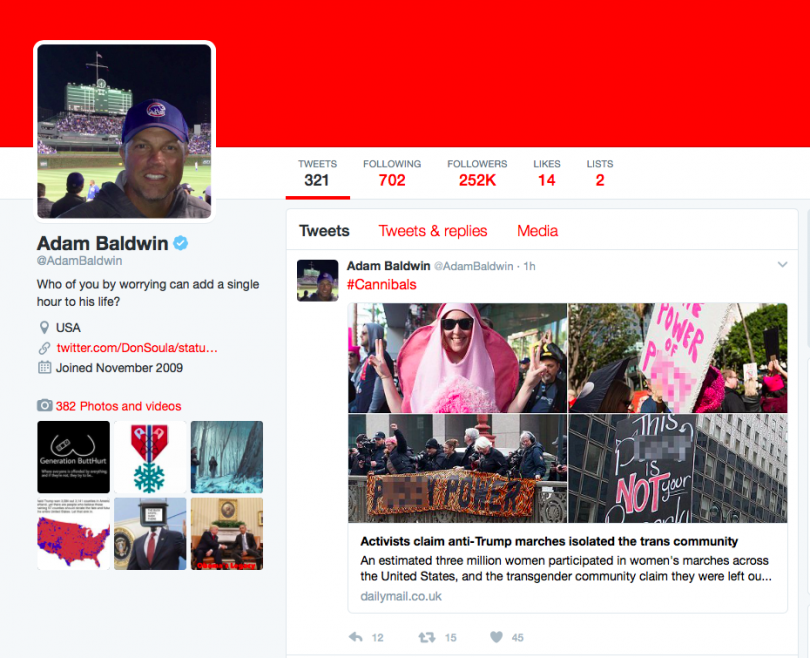 Meet bomb threat and Breitbart crew member, Adam S. Baldwin. yes, all you (wow, forgot name of show already) fans — oh wait, it’s NBC’s Chuck — this is the guy you ADMIRE. 😐 And now TNT (@tntdrama) has cast this racist in a new show, The Last Ship. I’ll definitely be boycotting the show and ANYTHING Baldwin is in!

anywhoooo see Adam S. Baldwin as he REALLY IS: https://www.change.org/p/incendiary-inflammatory-racist-and-bomb-threat-supporter-adam-s-baldwin. Baldwin has changed his twitter handle from @adamsbaldwin to simply @adambaldwin, which is what #tcot hatriots do often after someone embeds one of their really offensive tweets. And by the way, I wouldn’t have known of his new twitter name if not for his “meddling” buds who stopped by my way with their offensive, hypocrisy filled profiles while backpatting Baldwin.

and meet one of Baldwin’s misogynistic friends: https://itamra.com/cc2012/index.php?m=03&y=12, another Breitbart team member. this is the normal way Wayne Austin talks to women, and you can imagine what he says about Dana Loesch behind her back but she, nor Baldwin, wouldn’t care as along as Wayne hates the right people and says the right #tcot buzz words to feed their “PAC”.

oh and they’re “conservatives”, “libertarians” (live and let live, right? :shrug:) , and/or “christians” (but not in the tradition of Christ, but some other deviant form of christianity)

@adamsbaldwin https://twitter.com/itamra/status/103980641825198081/photo/1 starred on NBC/Warner Brothers television show “Chuck” and is under contract with those organizations, including with a morality clause.

2. Adam S. Baldwin, as a public figure and representative of NBC/Warner Bros and with a morality clause to adhere to, resorts to lies, distortions, degrading insults including towards women while declaring himself a “moral standard” to adhere to.

4. I have received an actual bomb threat from a member of Adam S. Baldwin’s inner circle, and the persons who supported, condoned and high-fived the bomb threat are also in Adam S. Baldwin’s inner circle, persons Adam S. Baldwin high-fives, praises and even RT’s incendiary and false statements of. These persons have terrorized many on and off twitter for years, not to mention a Breitbart staff member sent death threats to a local media member which is boldy denied by @Liberty_Chick, a person who came to attack me personally with a barrage of insults (including “asstard” after demanding I click a link to her rhetoric – screen shot: https://twitter.com/itamra/status/103524009328656384/photo/1) on behalf of Adam S. Baldwin while calling herself a professional and credible journalist. A printout of her entire day of insults was created. Ironically the proof she was asking for while calling me a liar is linked directly on home page of my site. But another confirmation of the Breitbart team being unfamiliar with gathering facts on their own while touting “journalist” titles.

6. Ironically when stating a fact about Adam S. Baldwin after another of his incendiary comments directly to me: that Baldwin pals around with bomb threaters and their supporters, one of his lynchmob members actually sent me a tweet, directly praising Baldwin and a member of the proud bomb threat team: https://twitter.com/#!/lucynowa/status/103150468028563456 – note that the original tweet the harasser is replying to doesn’t mention any of the bomb threat team members/terrorists by name.

7. NBC should not be paying or promoting a person who represents divisive and destructive views towards others including through the use of a show on NBC. If Adam S. Baldwin arrived at work in his true attire, a Ku Klux Klan robe while holding a bomb, I’m quite sure NBC would be concerned, as concerned as they should be now. Adam S. Baldwin also poses a workplace safety issue as well as variety of other issues given he pounces upon anyone he perceives is “liberal” (caring for all, equality, diversity), persons Adam S. Baldwin believes should be eliminated because he claims they’re “fascists” (which ironically means persons having extreme right-wing views in the tradition of Adolph Hitler, Diana Mitford and Gudrun Himmler Burwitz, the queen for Neo-Nazis). https://twitter.com/itamra/status/103980641825198081/photo/1

Adam Baldwin’s words and actions (hate) dominates #tcot. Their philosophy: liberalism is a disease, a mental disorder, and they’re the cure for it, while calling themselves, “christians” and “moral standards”. But ‘memba gun-toting, enraged, “Jesus” who preached hate of others? Yea, neither do I?