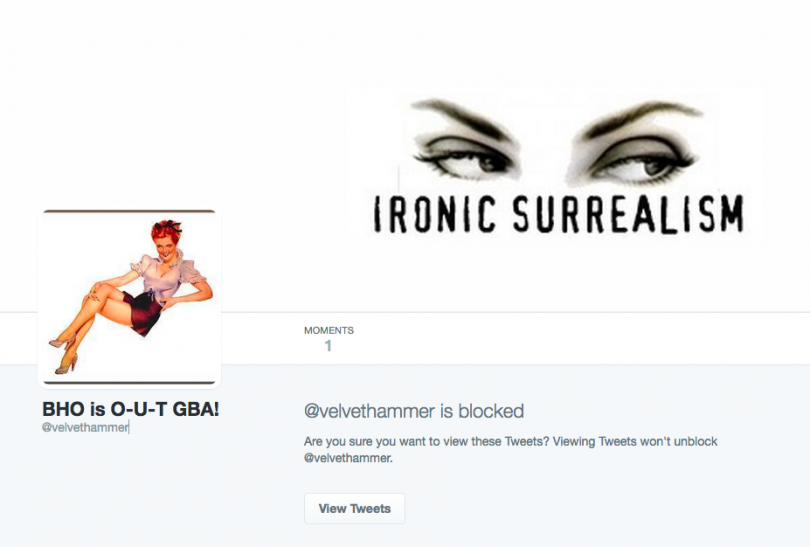 first, it should be noted that @velvethammer DIRECTLY associates with ALL persons related to bomb threat I received. but @velvethammer has been promoting an article complaining about how S.E. Cupp was portrayed in Hustler, which appeared in my own http://paper.li newsletter, otherwise, I never would have known she existed. I found the “S.E. Cupp” complaint ironic GIVEN the persons she pals with and my own experiences with them.

@velvethammer is also Michelle Malkin’s faithful little servant dog: whatever Malkin tells her to distribute, she jumps like a good slave and distributes the information and will swear by all of it without thought, pretty much like Goebbels swore by “All Things :hitler:”.

I basically ignore #tcot-rhetoric. majority of it is nonfactual nonsense to promote ideology, and a complete waste of time.

and RIGHT OUT of the Sarah Palin playbook, throw bombs THEN play victim, @velvethammer executed the victim-play with perfection. facts were also ignored, including how our conversation FACTUALLY started. she didn’t care, but wants persons to believe the information (rhetoric) she presents is FACTUAL and to be taken seriously, but doesn’t understand why others don’t take her information and look at the new-GOP with complete shock.

@velvethammer “LOL” yes *I am* serious. Whatsamatter, u can’t look in your OWN backyard b4 knocking on neighbor’s door? @mrjoshcook @secupp

😮 sooo @velvethammer comes to this site, and immediately responds with [b]THIS[/b] as an attempt to rewrite her own party’s history:

@velvethammer LMAO wow so what history WON’T you attempt to rewrite. Ok I’ll be adding your info to itamra.com/cc2012, it speaks volumes

I didn’t even bother to read the link nonsense, because it’s the equivalent of telling me that Ku Klux Klan was a “social club” only. and of course, they’ll always bring up Robert Byrd as not defecting to GOP. Even GOP candidate, Ilario Pantano, a sick sadistic killer that @BostonMaggie praises, had to mention that KKK member, Robert Byrd didn’t switch to GOP. so what, that DOESN’T negate that countless others DID make the jump because they wanted NO PART whatsover of non-whites and jews!

but now @velvethammer veers off the train tracks completely, missed entire point of original message – look within your own party before you distribute article bashing “left” for what your own group does WITH PRIDE 24/7!

@itamra You knocked on my door. #applesandoranges fool Now slither back from whence you came. Mmmkay…thnx. #tcot

.@velvethammer my gawd, you posted an article SLAMMING left as mysogynist WHEN your own backyard is itamra.com/cc2012 #tcot

and now reminding her of my username which was under constant attack because it was assumed “ilovemytroops” represented that “I hate poor, non-whites, gays, Democrats AND Liberals” and once it was discovered I didn’t, out came the repeated and vulgar attacks which were captured, including a bomb threat.

.@velvethammer and you don’t remember me from the BOMB THREAT your #tcot group sent proudly? Or did u rewrite that history too? @secupp

notice my direct, non-emotional words with her, and notice the type of “conservative” and “christian” responses I receive. again, she’s a leader and mover-and-shaker for her party, and this wants to be in charge again!

@velvethammer Your tweet re: “left attack on @secupp was featured in my paper. Sorry that caused u to insult & confirm itamra.com/cc2012

and this fact, REPEATED FOR HER, dismissed and tossed out window. again, she’s a leader and mover-and-shaker for her party while distributing supposed “factual” information.

.@velvethammer I can assure you I don’t “stalk” you guys! I wouldn’t know u existed if NOT for @smallrivers promoting your vile hatred

.@velvethammer & furthermore, as complained to @smallrivers, all of you travel in packs & u are buds w/persons from bomb threat. #fact!

.@velvethammer the fact that u choose to dismiss the info, doesn’t dismiss that u *do* RT/backpat bomb threaters referenced in link.

.@velvethammer so I would think carefully about your next words as your credibility has already been damaged severely. @secupp #mysogyny

AND @velvethammer after realizing she’s caught in her own hypocrisy (because she’s traveling with a wild-dog bomb threat pack), now plays the Sarah Palin-victim card!

.@velvethammer and at what point did you assume you were of value after a documented bomb threat recvd by your group? @BarackObama

peep the “conservative”, “christian” and “libertarian” response from Joshua Cook. he didn’t respect my tone towards him or direct questions. I actually know what it’s like to have encountered an H.C. Strider type.

@itamra i love to follow liberal robot hate tards, especially the ones who i infuriate. jk, ur boring repetitive and unfunny, bad combo, bye

@itamra @secupp @michellemalkin ok, ok, ok, u can have a cookie, now shut up the adults are talking.

“The first myth of management is that it exists!”
— Unknown