what Silda Spitzer is thinking… 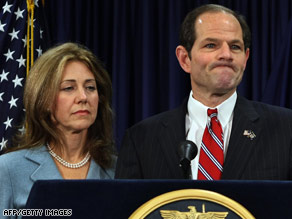 Damn! I should have married Client #1

but per David Letterman: “Client 9 will soon be looking for wife number 2”

but $80,000 on high priced hoochies! my gawd, people are losing their homes and can’t afford gas! he could have donated that money to folks struggling and I’m sure got some sex favors in return from some grateful people AND had a tax write off instead of a money laundering trail! what a dumbass!

besides, plenty of sex for him means he’s not off creating wars and problems, like, say, oh granting driver’s licenses for illegal residents and proposing a tax stamp for crack dealers.

it’s the funding of an organized crime ring which is why he has to go. he can’t be perceived as credible if he funds organized crime. the fact that he had to send the money secretly also confirms he knew he was doing something wrong. and the fact that he was formerly attorney general, he should have not only known better, but the name/number of every law he broke in the process.

when Client’s 1 through 8 are revealed. what a cliffhanger! 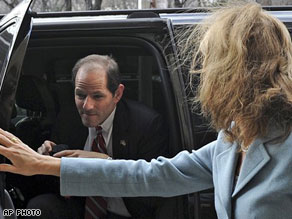 wait, is she getting ready to slam his head in the door…wow, now this is news!

NEW YORK (CNN) — Crime-fighting New York Governor Eliot Spitzer and his family remained holed up in their Manhattan apartment Wednesday as he faced growing calls for his resignation after being linked to a prostitution ring.

Meanwhile, a new opinion poll found that seven out of 10 New Yorkers believe their Democratic governor should resign in the wake of allegations while 66 percent of those asked said they believed he should be impeached and removed from office if he does not quit.

“It’s a big thumbs down,” Lee Miringoff, director of the Marist College Institute for Public Opinion, which conducted the poll, told The Associated Press. “It points to just how politically untenable his position is right now.”

Spitzer, who made a name for himself as the state attorney general by fighting white-collar crime — including a few prosecutions of prostitution rings — was named Monday in a federal investigation of a prostitution organization.

According to the poll, a majority of the 624 New York voters questioned by telephone Tuesday feel this incident should cost Spitzer his job.

Even if Spitzer resigns, 49 percent of the people polled still think he should face criminal charges. The margin of error of the poll was plus or minus 4 percent.

Spitzer has not admitted to being a client of a prostitution ring but did apologize for an undisclosed personal indiscretion during a brief news conference Monday.

Some New York lawmakers are calling for the governor to resign, and the state assembly minority leader has pledged to introduce impeachment articles against Spitzer if he does not step down.

Many voters agreed with him, according to the poll: 66 percent said they wanted the governor to be impeached if he does not leave office on his own.

If Spitzer does leave office, Lt. Gov. David Paterson would become New York’s first African-American governor. But 48 percent of those polled had never heard of him.

On Tuesday evening, a Spitzer spokesperson said he had made no decision on his political future yet.

Spitzer built his career on rooting out public corruption as New York attorney general, and became a national figure with a series of high-profile Wall Street investigations.

He is also known for prosecuting prostitution rings and earned the tabloid nickname “Eliot Ness” after the incorruptible hero of “The Untouchables.”

Once seen as a rising star in the Democratic party, Spitzer took office in January 2007 with a landslide victory after serving eight years as the state’s attorney general. But the scandal raises questions about whether he will make it through a second year.
Spitzer facts

• Tabloids label him “Eliot Ness,” because of his reputation for rooting out corruption, busting white-collar criminals and tackling organized crime.

• He attended Princeton and Harvard, then became an assistant district attorney in Manhattan.

• He worked for three New York law firms and decided to run in his mid-30s for attorney general.

• The first-term Democrat had been considered a rising star in his party.

• Spitzer is married and has three daughters.

A Democratic source with firsthand knowledge of the issue said: “It is a ‘when’ question on the resignation. Not an ‘if’… Eliot knows he cannot hold onto his job here.”

Another Democratic campaign veteran with ties to the Spitzer team said: “The political people were clear about the options. There are none. Not for him.”

“I think there’s no question if he is involved — and I’m not saying he is, because we don’t know all the facts — I would say he’d have to resign,” said James Tedisco, the Republican minority leader in the state Assembly.

Tedisco said Spitzer’s push to reform government “loses all validity if he was involved in something illegal like that.”

“I don’t have any comment on that,” she said when asked about the allegations. “Obviously, I am sending my best wishes and thoughts to the governor and to his family,” Clinton said.

The allegations, revealed Monday in The New York Times, were outlined in federal court papers detailing a meeting in a Washington hotel room last month between a prostitute and a client who a source told CNN was Spitzer.

A source familiar with the investigation identified as the hotel as the Mayflower Hotel. Sources said Spitzer rented two rooms — one under the name of a political donor.

The affidavit does not mention Spitzer by name, but a source with knowledge of the case said the subject identified as Client-9 is the governor. He has not been charged.

His alleged involvement with the ring was caught on a federal wiretap, the source said.

The prostitute, identified only as “Kristen” worked for the Emperors Club, which charged between $1,000 and $5,500 an hour and operated in New York; Los Angeles, California; Miami, Florida; London, England; and Paris, France, according to court papers.

“If it wasn't for pickpockets and frisking at airports, I'd have no sex life at all.”
— Rodney Dangerfield