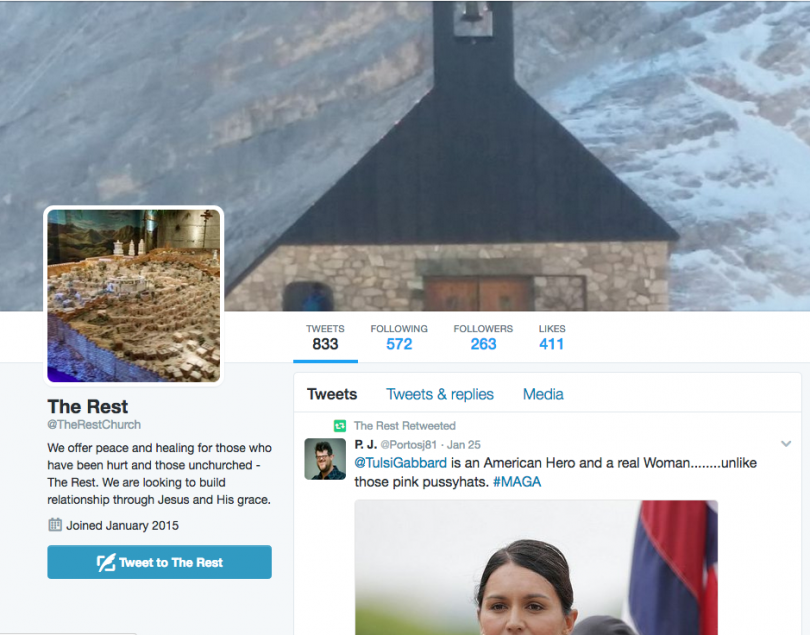 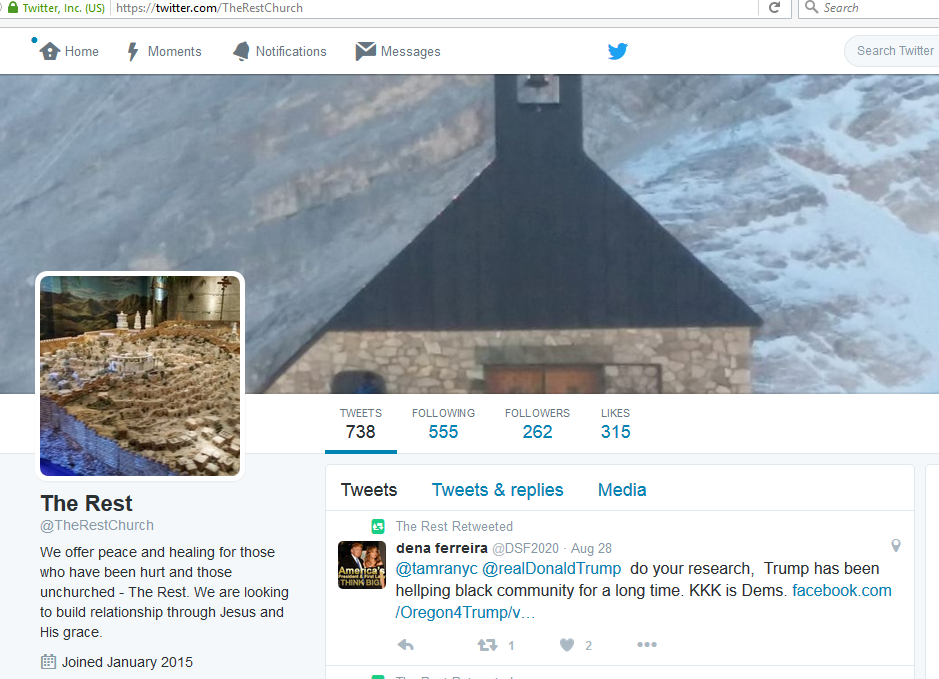 @TheRestChurch – looks like a place where he keeps chopped up bodies it snatches from pews after luring them into its sick church. #TrumpTrain #MAGA-psychopaths

This one runs a church of of “Jesus” :-|, but based upon the

version of Jesus and the white nationalists it roams with. This person wants to educate me to fall in line, and if I don’t then what?? Well, you’ll see shortly.

https://twitter.com/TheRestChurch/status/770387179289837568 – deflection from Donald Trump cheating creditors, making false tax declarations repeatedly, including for land, ties to foreign countries that are a security risks, organized crime ties and prostitution payments as business expenses ALL. IN. TRUMP’S. TAX. RETURNS!! BUT if you’re a Trumpkin, that’s not a problem while calling Hillary “corrupt” and “crooked”, AND while claiming to be a “christian”.

@tamranyc @DSF2020 @HillaryClinton @realDonaldTrump I am confused. Foundation is nothing but tax fraud. Y bring up something she is worse at

@tamranyc @realDonaldTrump there are no ‘Natives’ speaking if history. Migrated from Asia.

now this next one is priceless: it’s not understanding the reference about which “Jesus it worships: the one

it roams with worships or UK King James’ altered and translated version. but seriously, I’m just trying to clarify directly from the source, instead of assuming like them.

@tamranyc @DSF2020 @HillaryClinton @realDonaldTrump not understanding the reference. Is all you see racial? Killary panders worse than all.

but remember earlier it stated, I had to “go all racial”, but peep the mind of Trumpkins. this person actually said this and expected me to think, “you know, I’d better listen to your nonsense, look into and then SPREAD it” just like Trumpkins are spreading nonsense about Hillary Clinton’s health.

@jsavite @tamranyc @DSF2020 @HillaryClinton @realDonaldTrump I did. She idolizes Saul Alinsky. Read up on him also. Also PP targets blacks.

😮 yes you read that: “PP targets blacks!” forget about cancer screening, unwanted children, and preventative health care for poor. THIS IS the mind of Trumpkins: mental illness with :nra:,

and LOTS and LOTS of rhetoric they’re never challenged on because they only associate with the same persons who speak the SAME WORDS.

and this person is still not noticing that the main response from me: a link to this blog with all of the outrageous statements from GOP including its exact same words. I’ve heard and seen it all on Twitter and Facebook since 2008. each one that comes along thinks it’s smarter than the last

but approaches with the EXACT, SAME WORDS. for example: Twitter users, Andrea Silver AND Alinsky Defeater who have both been tweeting same stuff SINCE 2008 AND 2009!!

I blocked Andi in 2008 and never looked back.:-):cheers::clap: in fact, I forgot her name, but just remembered that she ONLY tweeted anti-black, anti-Obama, Alinsky tweets 24/7, along with another one who did the same! I had to wade through 100s of blocked hatriots

to find her account as I was saying, “I remember it was something named Alinsky or Andi”

FOUND THEM BOTH at the bottom (irony)! 8-years later, both have built a large following of conspiracy theory, grasping, angry and racist persons who call themselves “christians”.

but here comes TheRestChurch speaking as if we’re sooooo dumb and don’t know anything! yes, we know how to use block, which is what he/she should do when he sees something he/she doesn’t like.

https://twitter.com/TheRestChurch/status/770392426737532929 – there’s hope, maybe it’s catching on, but doubt it’ll read link because after all, it’s NOT their job to read BUT to tell others what to think.
sound familiar??:hitler:

@tamranyc @jsavite @DSF2020 @HillaryClinton @realDonaldTrump yes, no, yes, ni,yes, no. I’m done. Like true discourse, believe what you will.

But YES, I am blessed, blessed to know who they are, who they are not. They’re DEFINITELY NOT

“christians”. Persons like this are beyond dangerous :nod:, criminally insane

with lots of guns

and prideful ignorance :nod:, and full of hypocrisy and rhetoric to justify their actions and beliefs being spread through lemmings.

They hate liberals, while claiming to love “WHITE Jesus”, YET liberals aren’t creating bills to stifle their rights, nor insert their version or self-taught understanding of religion into government to force acceptance of one viewpoint WHILE openly and pridefully hating others and encouraging others to do the same!