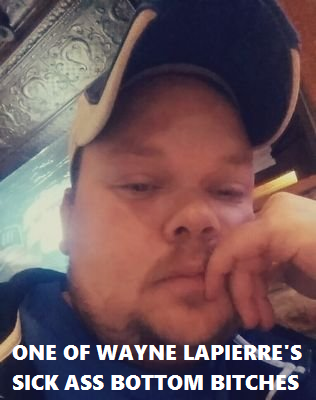 The NRA then tells NRA Prostitutes what to say, what to wear (obviously for sale via the NRA and its logo-labeled partner sites as it wants its bitches clearly identifiable as its property with NRA-pimped out gear, NRA tramp stamps and all), how to act in public (Open Carry; shoot first, then make up story later; be your own judge, juror and executioner in ANY petty situation; etc.), and how to bring Big Daddy in more money including through forceful rhetoric.

And what would ANY NRA pimp be without his bottom bitch?! NRA’s property, Sarah Palin.

You can find all the NRA Prostitutes by the following hashtags: #MolonLabe (sounds like labia, huh?)

Or you’ll easily recognize NRA Prostitutes by the following in their Facebook or Twitter bios: “ΜΟΛΩΝ ΛΑΒΕ. #USN #TCOT #Breitbart”

that’s not “Moron”, even though that was your first thought

upon seeing their bios, huh? but it means, “come and take/get them”: 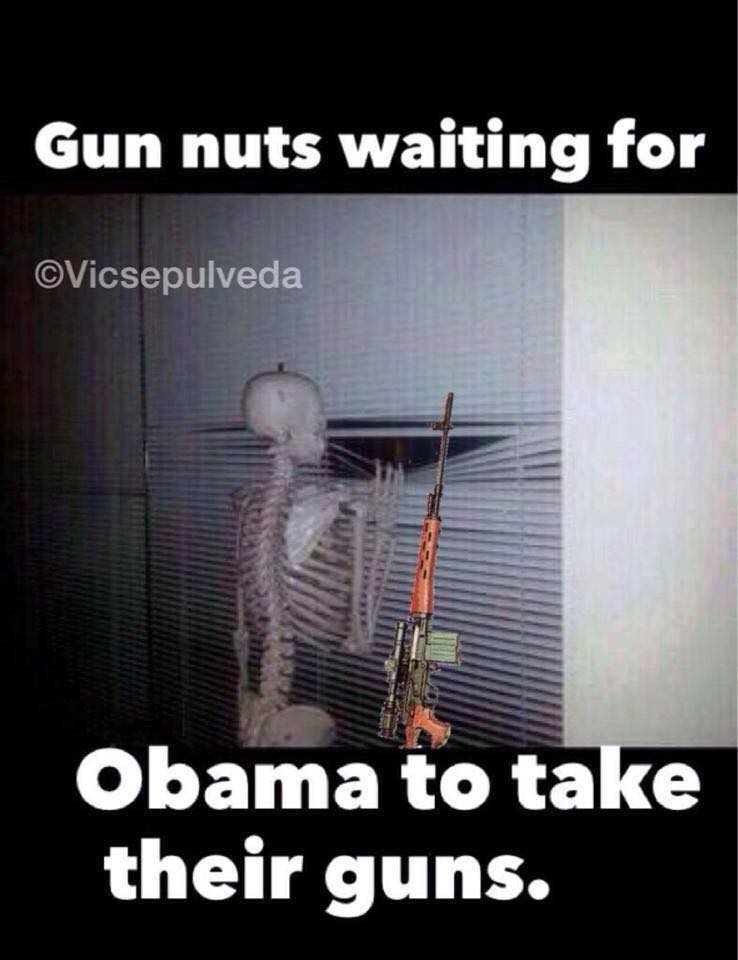 Newsflash: Second Amendment exists with or without the NRA. You don’t need to send them money to buy a gun, IF it is necessary to have. And where I grew up, real hunters used a single-shot gun OR simply a knife, including for large prey. Also, where I grew up, NRA, in direct collaboration with ku klux klan, denied gun permits AND ammo to non-whites. FACT!

NRA needs NRA Prostitutes‘ money to pay for their expensive CapHill lobbyists (also with mistresses in tow) to ensure their high capacity/assault rifle weapons are distributed with ease for the next mass shooting. NRA will even lie to get its goods into a state which bans its prostitution gear (e.g., assault riflessss in Connecticut advertised as a “sporting gun”, except Connecticut’s Sandy Hook massacre of babies and teachers 😮 didn’t look like a sport).

Meanwhile, NRA advertises that “Non-white savages are coming to your (white) home/community, so buy our expensive NRA sponsored and promoted guns and accessories to stay safe. And God Bless America“. However, the following mass shootings contradict NRA’s “black savages are coming” rhetoric:

University of Alabama-Huntsville shooting carried out BY *Biology Professor* Amy Bishop, so, soooo much for arming teachers theory!

Waco, Texas shootout – note law enforcement (active and retired) was shooting right alongside “suspects”. Which one was the good guy vs. bad guy?? And note update after all of the arrests:

Of 170 held after Waco biker shooting, all are now out of jail, with none charged in killings
http://www.dallasnews.com/news/state/headlines/20151004-of-170-held-after-waco-biker-shooting-all-are-now-out-of-jail-with-none-charged-in-killings.ece

…and so on, and so on… until “the next one” per their “brilliant” spokesperson, Ben Carson

And “Open Carry” is now being denied to blacks applying for permits:

But here’s a chance for NRA Prostitutes to redeem themselves:

2. Did NRA do anything to protect victims of these savage crimes, as in did NRA fight to get gun permits, weapons and ammo to these victims or did NRA fight to arm the white, male, domestic terrorist savages in these incidents: https://tamra.nyc/jcb?

4. What did NRA call Malcolm X or Original 1960s Black Panthers as either defended their homes and families from NRA’s armed and sponsored, Ku Klux Klan?

NRA Prostitutes, please submit your answers via comments or e-mail. Let us know you’re not just a dumb NRA “hoe-for-sales”.

HINT for #3 above: Byron De La Beckwith was both a klansman AND celebrated, including with a parade, by ku klux klan after his initial acquittal of his SAVAGE shooting of Medgar Evers. WWII VETERAN Evers was shot in the back, gunned down by a savage coward and ANIMAL who sat and waited, hidden in bushes across from home of Evers, for a long period of time, then opened fire as Evers exited his vehicle in his own driveway. The fact that De La Beckwith remained hidden in the bushes confirms he KNEW he was about to do something wrong!! Evers family had to watch him die in the driveway of his own home he worked for including by fighting for this country, which couldn’t even fight for him. NRA nor its Jim Crow Benefactor members sure as hell didn’t fight for the life and protection of Evers or Dr. King!!

NRA Prostitutes, ass up and knees-down, working for their NRA Big Daddy:

“If toast always lands butter-side down, and cats always land on their feet, what happens if you strap toast on the back of a cat and drop it?”
— Steven Wright