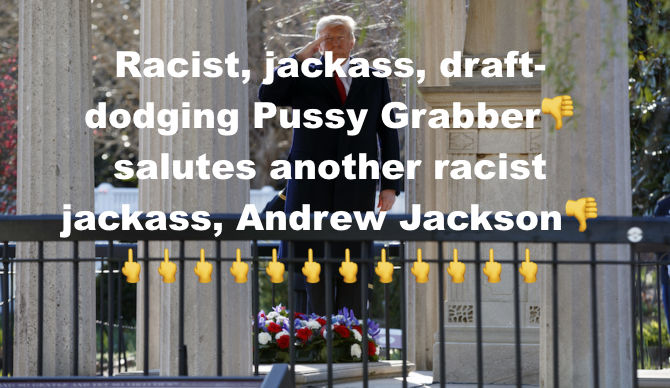 Funny, I would have thought Pussy Grabber admired Hitler most, but I guess it’s too soon to break out that admiration card. Give it 2 more years and no one will notice after being desensitized to an ignorant jackass and his army of savages. 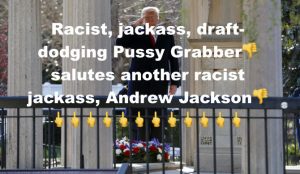 In 1830, racist, confederate, degenerate Andrew Jackson signed the Indian Removal Act, which relocated most members of the Native American tribes in the South to Indian Territory (now Oklahoma). The relocation process, known as the “Trail of Tears” — removing persons from their HOMES, LANDS, ANCESTRAL WAY OF LIFE — resulted in widespread death, depression, and illness as Native Indians were forced to WALK from their ancestral lands to reservations in western regions. That removal process IS a violation of human rights, and contradicts “don’t tread on me”.

Andrew Jackson was a proud slaver, who owned 200+ slaves. He wrote a letter to the Postmaster General Amos Kendall on August 9, 1835, suggesting that antislavery tracts “be delivered to none but who will demand them as subscribers; and in every instance the Postmaster ought to take the names down, and have them exposed through the public journals as subscribers to this wicked plan of exciting the negroes.”

The Blacks For tRump who have to embrace confederate-kkk sympathizers, or lose their $$ train once they learn to think and speak for themselves, instead of repeating their master’s words 24/7.
https://twitter.com/DiamondandSilk — notice there’s no comment about this, while they’re “lawn jockeying” other acts and statements of their master. They’re “grinning and bearing it” just like a good…

“The smaller the mind, the greater the conceit.”
— Aesop