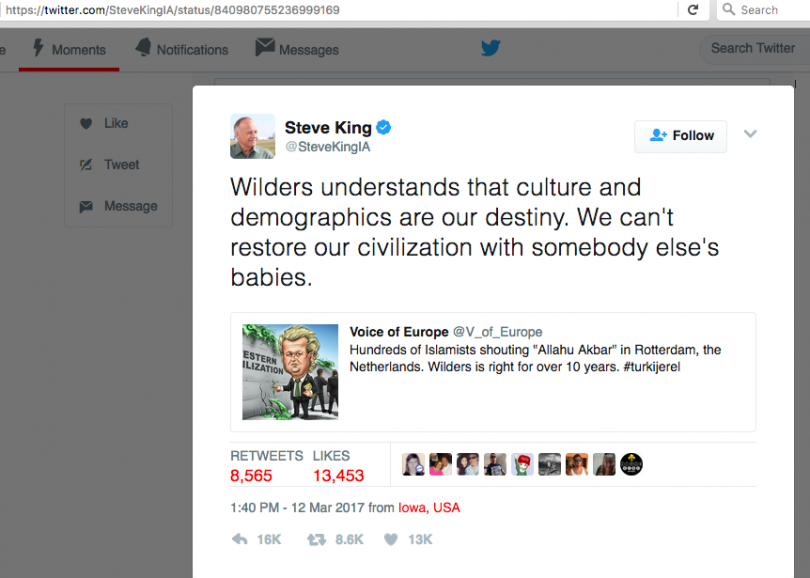 Pussy Grabber-tRump has always admired Iowa’s US Representative Steve King. Steve King consistently legislated with Michele Bachmann AND Mike Pence, which is how I first noticed Mike Pence in 2008.

The three of them were always pictured together AND attended same hate-based events. I wondered who were the other two guys always flanking Michele Bachmann as she was screaming about “white jesus” and “sinners”, and discovered they were Mike Pence and Steve King. Then I viewed their voting records, yes, Pence’s too. WHOAAAAA.

Thus, why I’m not surprised by this latest “white nationalist speaking festival”, but I’m more surprised that Iowa keeps electing a known racist with hate and disdain for Native Indians, whose land he sits on, while constantly opining about “this is the white man’s land”, and legislating via “whites only mentality”.

I was also not surprised that Pussy Grabber-tRump selected Mike Pence as his VP. Pussy Grabber is the son of a klansman, and Pence’s voting record pays homage to Indiana kkk grand dragon, D.C. (David Curtiss) Stephen. Pence quickly sealed his voting record while vying for the nation’s highest office, White House, as a lawmaker. If Pence was so honest and decent, what reason would he have to seal his voting record? Pence is also fighting to seal his extremist emails while legislating in Indiana, emails that were non-secure and on public service. There is not one klansman that doesn’t adore and swoon over Pence. Gee, I wonder why?

BUT… what is surprising to me: the number of today’s GOP, including an ignorant neighbor, who say “Dems are kkk” while sitting among today’s kkk daily!

The past couple of days have confirmed where confederates-kkk migrated to after Democrat Lyndon B. Johnson signed both the Civil and Voting Rights Acts, a migration that began with confederate-kkk-Strom Thurmond, who co-authored “The Southern Manifesto“. Today’s GOP will try and say deflecting things such as, “Lyndon B. Johnson was kkk too”. FALSE! Johnson fought against kkk as a child and knew their hateful hearts. His speeches also confirm this, but as usual today’s GOP doesn’t read anything that doesn’t promote their agenda, OR even listen given LBJ’s speeches are also in audio format via LBJ’s library of history BEFORE and AFTER his term as both VP and President. 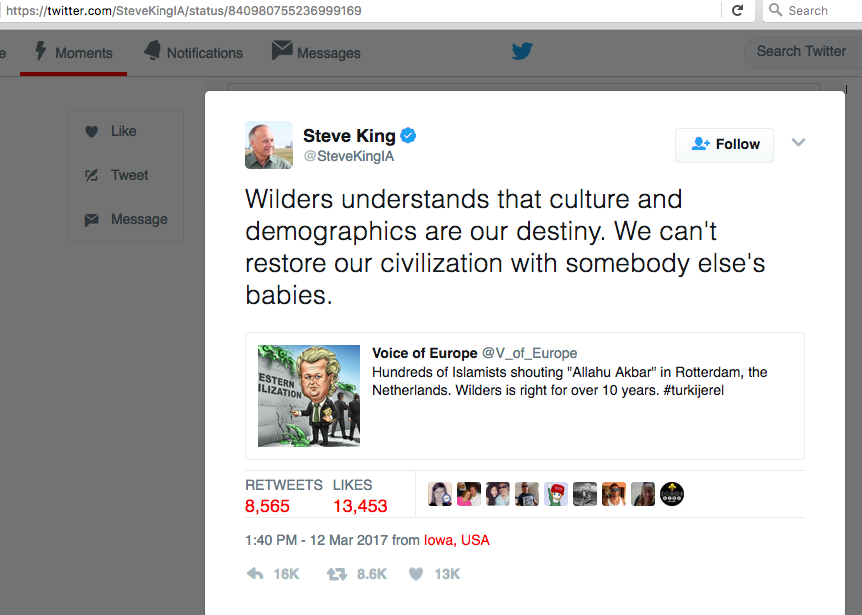 Steve King retweets and promotes a white nationalist. Dream on Steve King! We were here before you and will be here to close the door when you leave!

Wilders understands that culture and demographics are our destiny. We can’t restore our civilization with somebody else’s babies. https://t.co/4nxLipafWO 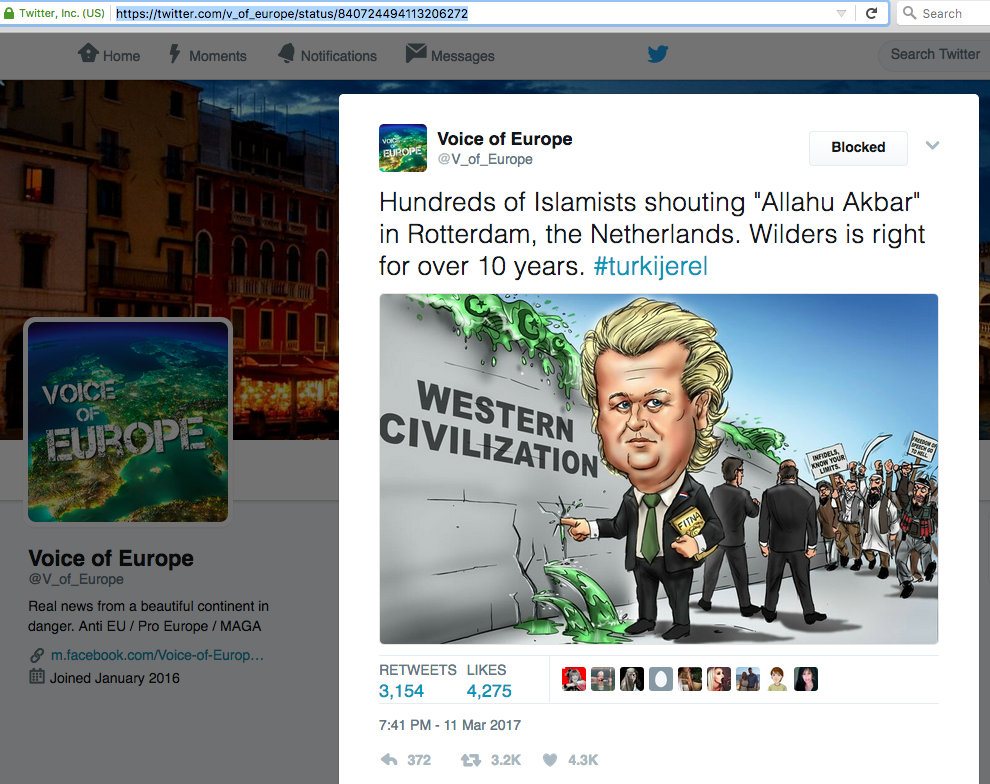 Geert Wilders who gives Dutch a bad name. If you know the history of our country prior to 1699, you’d know how ignorant Wilders and his followers are.

Hundreds of Islamists shouting “Allahu Akbar” in Rotterdam, the Netherlands. Wilders is right for over 10 years. #turkijerel pic.twitter.com/dV2SjXg23r 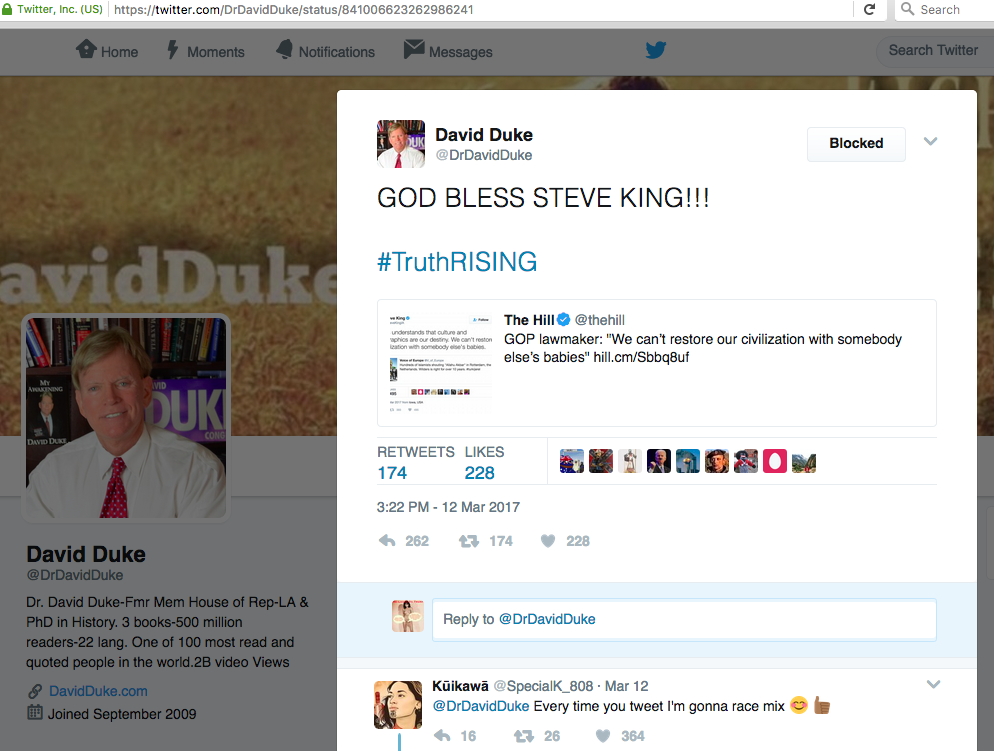