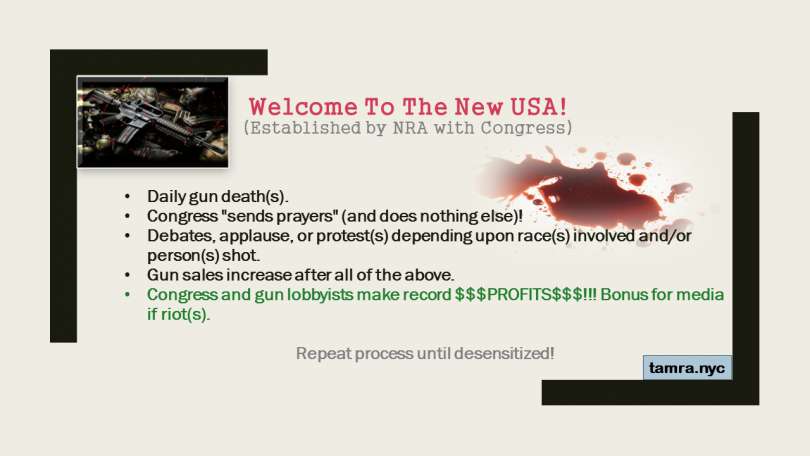 NRA Prostitutes can’t wait to open their mouths for their Big Daddy, Wayne LaPierre. However, when it comes to NRA’s history, both NRA Prostitutes AND NRA are silent.

But here’s a chance for NRA Prostitutes to redeem themselves:

2. Did NRA do anything to protect victims of these savage crimes, as in did NRA fight to get gun permits, weapons and ammo to these victims or did NRA fight to arm the white, male, domestic terrorist savages in these incidents: https://tamra.nyc/jcb?

4. What did NRA call Malcolm X or Original 1960s Black Panthers as either defended their homes and families from NRA’s armed and sponsored, Ku Klux Klan?

NRA Prostitutes, please submit your answers via comments or e-mail. Let us know you’re not just a dumb NRA “hoe-for-sales”.

HINT for #3 above: Byron De La Beckwith was both a klansman AND celebrated, including with a parade, by ku klux klan after his initial acquittal of his SAVAGE shooting of Medgar Evers. WWII VETERAN Evers was shot in the back, gunned down by a savage coward and ANIMAL who sat and waited, hidden in bushes across from home of Evers, for a long period of time, then opened fire as Evers exited his vehicle in his own driveway. The fact that De La Beckwith remained hidden in the bushes confirms he KNEW he was about to do something wrong!! Evers family had to watch him die in the driveway of his own home he worked for including by fighting for this country, which couldn’t even fight for him. NRA nor its Jim Crow Benefactor members sure as hell didn’t fight for the life and protection of Evers or Dr. King!!

NRA staff NOR their members won’t answer info unless their lobbyists advise, “the money will stop coming unless you do.”

NRA Prostitutes can’t answer because they’ve been so indoctrinated by NRA and/or belief that their gun is their only sense of power, while NRA owns them mind, body and wallet (unnecessary and expensive assault rifles, ammo, accessories, shooting ranges, conventions, membership, clothing, clubs, etc. etc.).

But I guess NRA Prostitutes’ inability to answer these LEGITIMATE questions confirms why NRA doesn’t allow guns at its own headquarters, UNLESS it’s one of THEIR armed guards to protect them from guests with guns, including its own members, because NRA knows what type of willfully ignorant, violent trash it’s selling its guns to, and where guns from gun-lax-law states end up. Let that sink in: NRA solicits gun products using fear-based sales pitches, THEN restricts OPEN CARRY gun permits at their own HQ. Can you say, “PLAYED!!!”???

See NRA terrorists in action… how they spend their days: https://tamra.nyc/nra-prostitutes-in-action, and how NRA’s HQ claims it’s UNAWARE of the same terroristic behavior it’s promoting.

“Wife who put husband in doghouse soon find him in cathouse.”
— Unknown